Want to be the first to know about new releases, events, and exclusive freebies?

On Saturday 19 August we’ll be showcasing our new album CONTACT at Kent Ridge Alumni Family Day, NUS’ annual homecoming to welcome alumni, students, faculty, staff and their families back to Kent Ridge Campus. We’re performing with Brannlum on keyboards and Kids with Laptops on visuals.

More about the event –

Held at the University Town, participants will get a glimpse of modern campus life, enjoy carnival activities, network with students and alumni at the Faculty booths and be entertained by stage performances by fellow alumni. The festivities will culminate in the largest outdoor movie screening on campus of a popular animated film, Trolls.

Come on your own or bring family and friends! 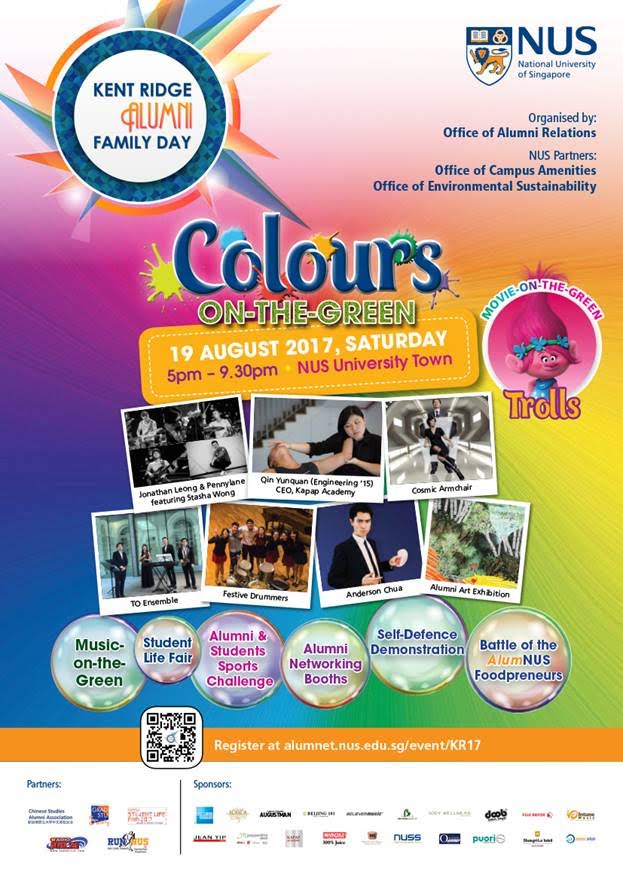 For the occasion of « Record Store Day », our label Alfa Matrix has launched a special -30% discount code on their whole music catalog including our own releases! CD’s, vinyls, digital: EVERYTHING! Simply apply the following code: RSD2017 and get 30% discount on all your music purchases on www.alfa-matrix-store.com or http://alfamatrix.bandcamp.com This code is valid until May 1st so take your chance now and thanks again for your support!

You can buy our previous EPs

You can buy other albums where we appear, and check out all the other cool alternative electronic music from our label-mates

There’s lots to choose from!

What is Record Store Day?

Record Store Day is an annual event inaugurated in 2007 and held on one Saturday every April to “celebrate the culture of the independently owned record store”. The day brings together fans, artists, and thousands of independent record stores across the world.

Recently when I conducted the two day workshop on Producing Electronic Music for School of Music Arts (SOMA), I decided to use the Yoga Home 500 PC/Tablet for teaching. In the process, I discovered 3 benefits:

1. Using the same computer for production and performance is more efficient

But that desktop was not only heavy duty, it was also heavy. So for many live performances, we had to duplicate our files onto our IdeaPad ultrabook instead. And if we made any new changes during the rehearsal or performance, we had to duplicate them back to the desktop. This led to messy duplicates and sometimes versions went missing or were over written.

Now our Yoga Home 500 not only has all the CPU power and screen size of a desktop PC, but is also portable enough to be brought out to the performance (or in this case, the lesson). The foldable stand turns it into a tablet that can be carried in a tote bag, and the wireless keyboard and mouse mean there are less messy cables.

2. Teaching by touchscreen is easier than teaching by mouse

My students used to have to strain their eyes to see where my mouse pointer was clicking on screen, even after increasing screen size and pointer size. Now that I use the touchscreen of the Yoga Home 500 to teach, students can see exactly where my fingers are pressing, and follow along on their own computers. 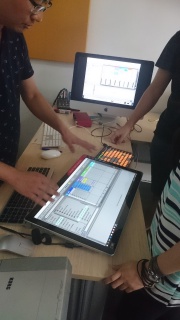 3. Performing live on the touchscreen is intuitive and fun

The multi-touch touchscreen of the Yoga Home 500 allows my students to experience hands on the ability to play live on the Ableton Live software, triggering and manipulating music with their fingers (see below) without requiring additional hardware or configuration.

We pioneered playing the touchscreen PC as a musical instrument with our Lenovo A720 at larger shows like our Esplanade Waterfront show (see first photo above). The Yoga Home 500 is more portable which means we can bring it for almost any performance.  This versatility is a great benefit for teaching electronic music, and I’m looking forward to playing it in live performances as well.

We recently uploaded our current single, I DON’T BELONG HERE, to the two leading online mastering sites, LANDR and EMastered, to see which one would do a better job of mastering* our music. Both sites  use proprietary artificial intelligence and algorithms to do the job automatically, at a fraction of the time and cost of human beings. Ideally we prefer to give our music to a good (human) mastering engineer with experience in our genre, but we wanted to explore if these automated sites could do the job for a quick demo.

(* ‘mastering’ is the final part of audio post production before releasing the song, where the final mix is processed with EQ, compression, limiting and other enhancements, and makes it sound professional)

The results between the sites are close, so you should listen to the examples and decide for yourself, preferably on good headphones or speakers (not earbuds). You may also want to compare the loudest parts where the beats kick in.

What you hear below is the original WAV file without mastering, as a baseline.

What you hear next is the result of uploading the WAV file to LANDR.com

Compare it with the result of uploading the WAV file to EMastered.com

Finally, here is the version that is available for you to buy in the Alfa Matrix store (hint, hint)

So , which one do you prefer? Please tell us in the comments.

We’re back in the studio after a long hiatus and our first recording of 2016 is this mixtape of our favourite synthpop / electro / EBM tracks from the Matrix Downloaded 4 compilation by Alfa Matrix, the top international alternative electro / synthpop / EBM label.

Yes we had our hands full with other matters in 2015 – new addition to family, new full time job, new live Peranakan electropop show – and we’re very sorry to our label mates whom we were unable to remix in time for your great EP and album releases (they sound great!) – but we’re back in action producing and remixing and ready to go!

This is a series of video interviews that the NUS Centre of the  Arts team recorded during our photo shoot for the show.  Over the next few weeks we’ll be  sharing more of our adventure, in creating our first Digital Dondang Sayang show, with you.

What is Cosmic Armchair?

What is Digital Dondang Sayang about?

Why do you enjoy working with the NUS Electronic Music Lab?

How is it performing at the NUS Baba House?

E-mail us cosmicarmchair@gmail.com if you need any info or have difficulty with the ticket system

For the first time ever, on 18 and 19 March we’re presenting Digital Dondang Sayang, the first performance of its kind combining traditional Dondang Sayang performers from the Gunong Sayang Association,  electronic pop from us {Cosmic Armchair), and experimental electronica from the NUS Electronic Music Lab, in the NUS Baba House, a heritage house recreating the ancestral home of a 1920s Straits Chinese family.

The songs are based on a selection of traditional Peranakan pantun (poems written in the Baba Malay language) written by Ang Kay Teong in the early 20th century, and handed down to his great grandson, our very own Cosmic Ben.

The show begins with a classic Dondang Sayang rendition of the poems by the Gunong Sayang Association, in the traditional style. This is followed by our Cosmic Armchair electronic pop interpretation and original new songs inspired by the poems. The show concludes with new experimental electronic works created and performed by the NUS Electronic Music Lab, that take the words of the poems into the next century.

All of this takes place in the most appropriate setting for a Dondang Sayang house party – the NUS Baba House, a restored Peranakan family home from the era of the poems.

In addition to being an artistic adventure of old and new music for all ages, Digital Dondang Sayang also follows Ben’s exploration of his musical roots, as he tries to discover who his mysterious ancestor was, and what inspired him to write more than 500 poems. Watch this space over the coming days as we follow him through that journey.

NUS EML is a performing group based at the NUS Centre for the Arts, which creates, records, performs and promotes original electronic music of all genres.

National University of Singapore restored the traditional family home of a wealthy Peranakan (Straits Chinese) family in Singapore, recreating what it was like in the early 20th century, and now this heritage house is open to visitors to explore the history and culture of this ethnic group that is unique to this region of Asia.